Spinning fibres was one of the first processes to be mechanised in the Industrial Revolution. It took many hours of hand spinning to supply the thread needed for the most basic treadle loom. The Hargreave’s cotton-spinning jenny, Crompton’s spinning mule and Arkwright’s water frame in the 1770s are early examples of man moving from hand to machine. Spinning machines have undergone considerable technical evolution. The CSIRO was a leader in this field in the twentieth century. In 1962 it improved on the traditional Spinning Jenny and, in conjunction with the Australian company Repco, produced the Repco Self-twist Spinner. This machine was 15 times faster at spinning fibres. Ten self-twist spinners were installed at Macquarie Worsteds in Albury in 1971. The machines, operated in a small air-conditioned room by one operator, had an output of 1,200 conventional spindles worked by three operators. The prototype of this machine is held within the National Wool Museum’s Collection. 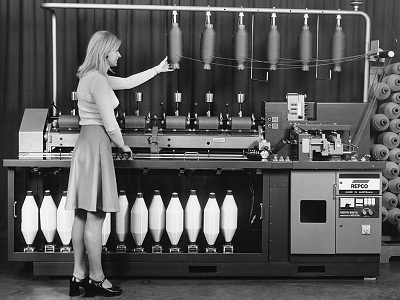